Everything You Need to Know About Sevruga Caviar

Only true caviar connoisseurs are familiar with the delicacy and value of sevruga caviar. Out of all the different types of caviar on the market, the smallest-sized roe eggs come from the sevruga sturgeon fish species. But when this roe is flavored and turned into caviar, it becomes one of the most delicious caviars in the world.

Are you thinking about spending the money on sevruga caviar and trying it for yourself? First, you should learn more about sevruga caviar to develop a better appreciation for it. Then you can savor every bite of the caviar with the knowledge of knowing where it came from and how it was prepared for human consumption.

Table of Contents show
1 Below are the top 5 most important things you need to know about sevruga caviar and why it is a good choice for a caviar newbie.
1.1 Small Size
1.2 Fast Reproduction Cycles
1.3 Several Nutritional Benefits
1.4 Sevruga Caviar Tastes Better Than Ordinary Fish
1.5 Easy to Import
1.5.1 Conclusion

Below are the top 5 most important things you need to know about sevruga caviar and why it is a good choice for a caviar newbie.

One of the advantages of consuming sevruga caviar is that it is easier to obtain and produce. The reason is that sevruga sturgeon have some of the fastest reproduction cycles compared to other sturgeon species in the sea. Because of this, female sevruga can mature and produce eggs faster. 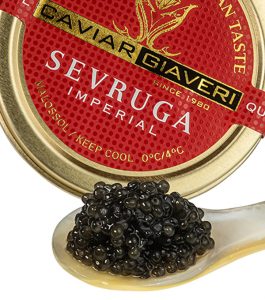 More people are discovering the dietary and nutritional benefits of consuming sevruga caviar. These benefits come from the various nutrients found in this caviar, including selenium, omega-3 fatty acids, vitamin B12, and protein. Add some sevruga caviar to your daily or weekly diet to enjoy a healthier lifestyle.

Sevruga caviar has a very distinctive taste compared to other sturgeon caviars. For instance, it doesn’t have as much of a fishy taste as the other caviars do. Instead, it has a buttery and creamy flavor that sticks to your tastebuds. People love this taste because it is so different and delicious. You’ll understand once you try it for yourself.

There are plenty of reputable e-commerce websites selling sevruga caviar to consumers online. Many of these vendors are located domestically but purchase their sevruga caviar supply from international vendors. However, their cost overhead is low because the production rate of sevruga caviar is faster. As a result, the consumer can enjoy a lower purchase price than other caviars on the market.

About the Author: Zach